SOAR is a club tasked with preparing underclassmen for leadership roles, and for academic and professional careers. This includes hosting various events to expose its members to the campus community and connecting with Student Government Association (SGA) to help students develop leadership skills.

Students who visited the SOAR’s table could pick out various colored square cloths to turn into Thankful Flags. Students could write, draw, or paint what they were most thankful for. SOAR offered many ways to customize each participant’s flag and their message using various markers and paintbrushes.

SOAR Director Chanel Davis wanted students to “take a moment and see what they were thankful for. As students we are so caught up with school, work, extracurriculars, and life that we sometimes forget to thank our friends and family.”

They encouraged all students to participate in creating the flags. Some students took a couple minutes to create their flags while some took just 30 seconds.

After collecting all the flags, SOAR hung them up in the Student Union for everyone to see. SGA Secretary Grace Brown wanted “everyone to be reminded of what our students are grateful for.”

Some of the messages seen on the flags mentioned “friends” and “roommates,” while some were more humorous such as a flag with the word “RAMEN”. Among the SOAR members, a popular flag was the “Indoor Lighting” flag that featured a light bulb. “I never really thought about being thankful for indoor light because it is just so normal for me to have,” stated Davis.

SOAR hosts the Thankful Flags event annually, with increasing student participation. Last year, the previous SOAR team said they got a huge turnout of students. “As the current SOAR team, we want to continue the tradition that was made from past SOAR members, and we hope the transition goes on after us,” described Davis.

This year, Brown told Horizons: “The SOAR members ended up getting so much participation that they actually ran out of flags and I’m very proud of how the event went.” 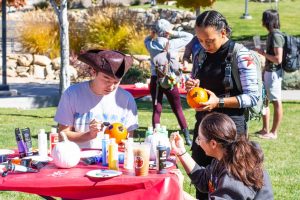