Embry-Riddle Aeronautical University is internationally renowned for being the largest and most respected university specializing in aviation and aerospace. ERAU alumni have gone on to be NASA astronauts, FBI agents, private and commercial pilots, and in one rumored case: a 9/11 hijacker.

This is something I’ve heard on campus repeatedly: that ERAU has covered up training a 9/11 hijacker, that one of the Daytona Beach students participated in our nation’s largest, and most tragic, international terrorism event in history.

But all staff, students, and alumni can discard these fears, because ERAU did not educate an international terrorist. The notion is another instance of misinformation and dangerous falsehood spread across our campuses.

Ken Brynes, the Assistant Dean and Flight Chair at ERAU Daytona Beach, told Horizons, “People saw the initial headlines and did not pay attention to the smaller headlines retracting the story. I still come across people in our local community that believe we trained the terrorists.”

This is not a light accusation, so how did the rumor start in the first place?

“The rumor was the result of an FBI investigation that began on 9/11 itself,” said David Keck, the ERAU Daytona Beach Chaplain, “An alumnus had the same name as one of the murderers, and the FBI recognized the importance of starting an investigation.”

The investigation aimed to determine whether any past or current ERAU students were involved in the terrorism. ERAU was flagged due to a past student, Waleed Al-Shehri, having a similar name to one of the confirmed hijackers.

Chris Bonner, an Associate Professor of Security Studies and International Affairs at ERAU Daytona Beach, was an FBI agent for 28 years prior to working at ERAU. He was one of the agents assigned to this case. After evaluating Al-Shehri’s student file, collaborating with the Volusia County Sheriff’s office, and interviewing a previous roommate of the student in question, Bonner was able to safely conclude that the ERAU student was not involved in 9/11.

“This was confirmed through contact that was made by the FBI and State Department Diplomatic Security Service,” Bonner told Horizons, “It is unknown how the information was leaked.”

Al-Shehri is a common name in Saudi Arabia, and the ERAU student with that last name was in no way involved in the terrorism.

“It took several days for our alum to be located (he was flying in the Middle East, I believe), but by then the rumors had picked up steam. The country was in agony, and people wanted answers immediately,” Keck expressed.

Despite ERAU’s attempts to make it known that all students and alumni were not involved in the 9/11 attacks; major news platforms, word-of-mouth rumors, and the national fear at the time made this a difficult task.

“Embry-Riddle issued a statement on Sept. 21, addressing the false reports. Unfortunately, the misinformation persisted, fueled in part, it seemed by fear and xenophobia in the post-Sept. 11 era,” said Ginger Pinholster, ERAU Vice President for Communications, who joined the university in 2017.

In response, Keck wanted Horizons readers to know: “our non-Muslim students were very supportive of their Muslim colleagues on campus. For example, the night of 9/11, members of the Catholic Student Union led by our Catholic Chaplain Father, Tim Daly, stayed overnight in the Center for Faith and Spirituality to make sure that no angry idiot from off campus would come and deface the Muslim Prayer Room on campus.”

As far as Keck is aware, there were no incidents of xenophobic hate crimes on campus. He recalls the time as an “indicator of the strength of the Eagle community”.

In the end, ERAU was cleared of any accusations claiming they trained a terrorist responsible for 9/11, and the questioned alumnus was safe.

Sadly, however, a different ERAU alumnus was killed during the attacks.

“An alumnus, David Charlebois, was first officer on the flight that crashed into the Pentagon,” Keck stated, “MANY of our alums were affected that day – but I know of no other alums who were killed.”

Charlebois was First Officer on American Airlines Flight 77. He worked as a corporate pilot throughout North Carolina before beginning his career as a commercial pilot in 1988. His name is listed on the ERAU Alumni War Veterans Memorial Plaque on the Daytona Beach campus. His biography can be found at the following link: [http://pentagonmemorial.org/explore/biographies/david-m-charlebois].

In closing, Pinholster told Horizons, “The only connection that Embry-Riddle Aeronautical University has to the tragedy of Sept. 11, 2001, was the loss of one of its own family.”

A sentiment on the behalf of Horizons Newspaper that is certainly shared by all ERAU affiliates: may we never forget the events of 9/11 and continue to honor the lives lost and families devastated by the tragedy. 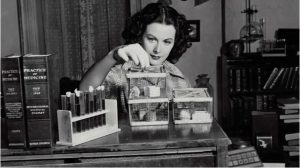