PRESCOTT, AZ – The Embry-Riddle Aeronautical University women’s soccer team took on Ottawa University of Surprise, Arizona for their opening game on Tuesday. Although the Eagles played a good game, the OUAZ Spirit defeated them by three to five.

The Eagles and OUAZ Spirit began at the soccer field at 7 p.m. The first half of the game began with excitement and action. Within the first five minutes, OUAZ player Saipress Jones scored a goal. However, 11 minutes later, Rae Yoshioka, a midfielder for the Eagles, scored a hard shot between the legs of the OUAZ keeper. Four minutes later, after Kylee Bennet sent Sierra Vicente a pass at the top of the 18-yard box, the latter scored another goal and gave the Eagles an advantage. This advantage did not last long, however, with Saipress Jones tying the game two minutes later. At around the 38-minute mark, Ellie Neal fired a goal from a few yards following a corner kick from Yoshioka. By the time the halftime whistle blew, the Spirit was able to tie the game thanks to Mindy Lertzman.

The second half of the game proved troubling for the Eagles. Within two minutes of the second half, OUAZ player Calzaretta Jones scored a goal. Saipress Jones scored her third goal of the night at around the 62-minute mark. Although the Eagles fought hard, getting very close to scoring another goal several times, the game would end with no more goals and the Spirit claiming victory.

According to the team stats on the Eagles’ website, Embry-Riddle took 11 shots (five on goal) while Ottawa took 10 (seven on goal). OUAZ had a shocking number of 13 fouls (actions that break the rules), compared to Embry-Riddle’s one foul. However, they had more saves (when the goalkeeper successfully stopped the ball from going into the soccer net), having a seven to three advantage. Additionally, Embry-Riddle had more corner kicks when a member of the defending team restarts the play from a corner of the field after the ball goes out of bounds), 10 to OUAZ’s four.

When asked to comment on the game, Eagles Coach Todd Poitras said, “I think any time you have your first game of the year, there’s always going to be some growing pains. We have had a long preseason and fighting through some changes with some injuries and things, things like that. So to be able to come out tonight and compete was great.  I thought we’d get some good stuff, scored some good goals. Unfortunately, we weren’t quite as sharp in some areas where I thought we could have been. So Ottawa’s a good team. They scored some great goals. Hats off to them and I’m sure they’re going to have a terrific season. But we’ll be fine, we’re not broken. We’ll just fix a few pieces that we need to and get on to the next one.” 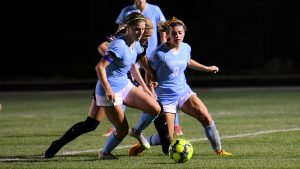 Taylor Brown, Editor In Chief  MEN'S BASKETBALL  The Embry-Riddle men’s basketball team was looking for a turnaround season after a...

TALLAHASSEE, FLA. – The Embry-Riddle women's cross country team showed why it is one of the best programs year in...

TALLAHASSEE, FLA. – The Embry-Riddle men's cross country team finished the season as a top-30 team, finishing 30th at the...