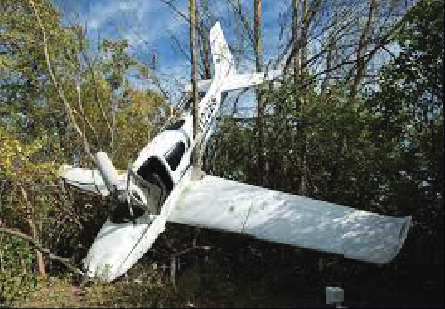 Welcome back! Last issue we covered one of the worst aviation accidents in history, the Tenerife Disaster. Now we’re switching gears, into an accident much more low-profile but no less tragic. While it’s terrible that these unnecessary crashes happen, we do nothing for ourselves if we don’t look into why they happened at all.

With that, let’s jump into the midair collision of a Cirrus SR22 and a Robinson R44 II that took place in Frederick, Maryland.

On Oct. 23, 2014, about 03:30 p.m. local time, a private airplane pilot was conducting a cross country flight in a Cirrus SR22, which is a small single-engine plane. As the airplane pilot requested to land at Frederick Municipal Airport, which is an airport roughly the same size as Prescott’s, a flight instructor and student operating a Robinson R44 II, a small two-bladed helicopter, also took off from the airport to join the pattern. Along with the pilots, the Robinson helicopter had an additional passenger.

The Cirrus pilot initially contacted the control tower ten miles away from the airport, and the control tower acknowledged their request, instructing them to call again when they were three miles away. Shortly after, the control tower cleared the Robinson helicopter to take off from a taxiway to join a left hand pattern for approaches to the grass (adjacent to the runway).

As the Robinson pilot took off and entered the pattern, the Cirrus pilot made a radio call to indicate three miles out, but their transmission was interfered with by a call from another aircraft, causing the Cirrus to go unheard.

Shortly after, the control tower called the Cirrus pilot, instructing them to join the pattern and report at the midpoint of their downwind leg, also advising them “I have three helicopters below ya in the uh traffic pattern.” The Cirrus pilot acknowledged this, stating that they had two of the helicopters in sight. Following this, the control tower cleared them to land.

Approximately eight seconds after the tower cleared the Cirrus to land, a call was heard from the helicopter indicating extreme distress. Another helicopter pilot following the accident helicopter would later report seeing the airplane appear in his field of view as it “flew through the rotor system” of the helicopter. The controller on break in the tower reported hearing the transmission, looking up and seeing the Cirrus falling from the sky.

All three occupants in the Robinson were fatally injured, and the passenger aboard the Cirrus suffered minor injuries. The pilot of the Cirrus was not injured.

Like many aviation accidents, there are many factors to consider here. The National Transportation Safety Board (NTSB), which is the body who investigates many aircraft accidents, stated in their final report that the accident could be attributed to both pilots’ failure to see and avoid other aircraft, as well as the control tower’s inadequate task prioritization. There was also very little documentation of the procedures regarding altitudes for helicopter traffic.

At most airports, helicopters fly around 500-600 feet above ground level (AGL). At Prescott, helicopters fly at 500 feet AGL. Fixed wing aircraft often use higher altitudes: at Prescott Airport, they usually fly at 1000 feet AGL. However, upon investigation of the procedures for both the control tower and the flight school of the accident helicopter, no documentation could be found for assigned helicopter altitudes.

The last radar return from the Cirrus had been at 900 feet AGL (seconds before the accident), but both the control tower and the helicopter flight school would claim that the altitude for helicopters in the pattern was 600 feet AGL. Again, no documentation could be found.

Additionally, the helicopter was not practicing any maneuvers where they would need to go to a higher altitude than standard. So why was the helicopter so far up?

Unfortunately, that question will remain unanswered. Realistically, the accident could be attributed to any number of human mistakes and errors – the failure of the helicopter pilot to remain at the correct helicopter altitude, the failure of both pilots to see and avoid the other aircraft, and the failure of the control tower to separate the conflicting traffic.

Hopefully, this will hit home for some of us flying here at Prescott, where we are often faced with several other aircraft in the pattern.

What can we take from this accident? Much like we discussed with the Tenerife Disaster, there is no harm in double checking. When the Cirrus pilot was informed of three helicopters in the pattern, he replied “I got two of them in sight,” upon which he was cleared to land.

As we now know, that last helicopter that he didn’t see was the Robinson, which would impact him less than a minute later. In an ideal world, that indication that the Cirrus pilot didn’t know where all of the other aircraft were would have been a red flag, prompting the Robinson, the Cirrus, and tower to all double check that they were situationally aware.

Unfortunately, that was not the case.

Throughout the semester, I hope to cover a wide range of accidents, from large to small, from famous to obscure, from fixed-wing to helicopter. If you have an accident in mind that you’d like me to cover, please reach out to me at dunna8@my.erau.edu. I’d love to hear any feedback and ideas you have.

By Lauren Bailey, Correspondent Image Credit: The New Yorker for Horizons “All creative people want to do the unexpected” —...

By Alexa Dunn, Correspondent Image Credit: ABC 7 News for Horizons Welcome back! Last week, we covered an accident where...

By Taylor Brown, Editor In Chief “97 percent of Embry-Riddle Aeronautical University, Prescott graduates get hired in their field of...