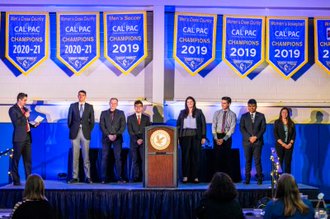 According to several leaders of nominated student organizations, organizations and individuals who were nominated for an award received an email letting them know about the banquet about two weeks ahead of time, hopefully giving them enough time to plan ahead to attend the banquet. Once they knew they were expected to go, students could RSVP on EagleLife ahead of time. EagleLife shows that 162 students registered for the event.

Once students made their way into the Activity Center, the atmosphere was set for a formal event. Students could check in with one of two student staff members at a table by the doors, who would mark the students’ names off their list with a pink highlighter.

After check in, students were free to sit at any one of the tables set up throughout a good half of the room. In an attempt to keep the atmosphere, normal rectangular plastic folding tables were draped with black tablecloths and pushed together to create square tables, and students sat on plastic folding chairs that had also been covered with a black cloth. Pouring bottles of water and iced tea were placed on each table ahead of time.

Those students who were there because they or their organization had been nominated for an award could take their nomination certificate from a table on the left side of the room. Once everyone was seated, and students had had enough time to settle in, dinner was served.

Dinner, provided by Sodexo catering, was served in two parts, with the first half of the room being able to acquire themselves dinner before the second half. Once everyone had one serving, there was no one preventing students from going back for seconds or thirds. The food included lunch meats, salads, pasta, meatballs, cannolis, and more. Some attendees commented that the food selection was not overly friendly to those with allergies.

After dinner, Dr. Emily Bauer, Director of Student Engagement, started the official proceedings with some notes about the ceremony. Dr. Rhondie Voorhees, Dean of Students, then made some opening remarks, mentioning that Embry-Riddle Prescott has a “rich and vibrant” campus.

Chris Gunlefinger, Assistant Director of Student Engagement, then made his own remarks, mentioning that most of the selections for the awards were close, with some of them being selected by a margin of only 0.5 to 1 point.

After those opening words, the awards started. The first award given out was the Organizational Advisor of the Year, which went to Kelsey Tempas, the Coordinator of Fraternity and Sorority life at Embry-Riddle Prescott, for her “awesome” work with Embry-Riddle’s Greek life.

The next award was for the student with Outstanding Community Service, which went to Michael Richard, who worked in Cottonwood teaching an intro to aviation class for local students. After that, the Outstanding Scholar Leader award, for a student who manages to exemplify leadership while also maintaining strong academic performance, went to Logan Hill, who is an Aerospace Engineering Major, who has been published in papers in the field twice, and is the leader of Sigma Chi Epsilon.

After that came the award for Outstanding Community Impact, which went to Alpha Xi Delta, which has been working to raise money to end domestic partner violence. Next, the organizational award for Outstanding Community Building, which went to the Flight Student Representation Community, which has been helping make Flight Students, who are often left out of student life due to needing to spend most of their time off-campus, included in campus life.

The next award was for two organizations to share – the Outstanding Collaborative Program Award, which went to the Cyberalliance and the Ethical Hacking Club, who worked together to host the CyberAero competition, which taught children coding skills, and then had them compete against each other.

After the initial set of awards, Tempas took over to announce the Fraternity and Sorority awards. The first award was the Chapter of Scholarship, which Pi Kappa Phi won, with Tempas stating that the chapter had an average GPA of 3.341.

The next Greek Life award was for the Chapter of Giving, which went to Pi Kappa Phi as well. The Chapter of Service Award went to Sigma Alpha Epsilon, as did the Chapter of Fellowship award for their Mental Health Initiative.

Sigma Alpha Epsilon won yet another award with the Chapter of Community Award, in part for the work during Spirit Week, where they hosted a game night in the Lower Hanger. They also won the Chapter of Principle Award and the Outstanding Chapter of the Year award, with Tempas noting the chapter’s 3.15 GPA.

Afterwards, more personal awards were given out, with Lillith Allbright of Alpha Xi Delta winning the award of Council Leader of the Year for her “incredible dedication”. The Fraternity Member

With that set of awards complete, Housing and Residence Life had some awards to give out. Their Customer Service Award went to RA Breck Meagher. Their Connections award went to RA Adrian Nagle, who was not in attendance to claim his award. The Care award went to RA Beth Chwialkowski.

The Rising Star Award, for the best first year RA, went to Rowen Stephens. The RA of the Year was Priyanshu Kumar, who was described as always having students at his door.

After those awards, Student Government Association (SGA) President Jeramy Gordon came to the stage to swear in the 2022-2023 SGA Council. After the new Council took their Oath of Office, President-Elect Prince Gersom Anselmo gave a short speech.

Gunlefinger came back to the stage to announce the award for Outstanding First Year Student, which went to Konnor Hopton. Outstanding Senior went to SGA Secretary Meagan Fama, and the Student Leader of the Year award went to Alisa Michel of Advocates and Allies.

There were then more organizational awards – the Outstanding New Organization Award went to Eagle-Themed Realities, and the Student Organization of the Year went to the Society of Hispanc Professional Engineers, whose Embry-Riddle Prescott chapter was recognized with a Blue Chip from the national organization.

Now that all the awards had been given out, Dr. Bauer gave some closing remarks. The event closed with a showcase of the BCA lip dub video, meant to generate hype for their recent concert, however, things did not go exactly according to plan, as when the video was played, it had the video and the music, but the voices of the singers were cut out. Although not the intended way to generate hype, the video was still entertaining, and the wordless music allowed the audience to better focus on the enthusiasm of the dancers.

The night closed with everyone being released, and encouraged to stay and take pictures by the provided backdrop, as well as take any leftover food with them (to-go boxes were provided for that purpose). Overall, the event was a fun, interesting, and engaging way to recognize the wonderful students and organizations here at Embry-Riddle Prescot 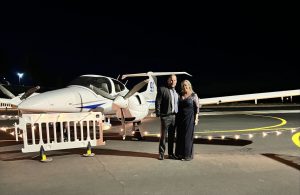