On April 19, the Jim and Linda Lee Planetarium at Embry-Riddle Aeronautical University played “Phantom Of the Universe,” a 30-minute film exploring the mysterious nature of dark matter. The show was narrated by Oscar-winning actress Tilda Swinton, and covered the basis of dark matter theory and how it is being studied.

The show opened with a view of the night sky from the surface of Earth, then took an introductory tour throughout the solar system and extragalactic objects. Swinton explained that throughout the entirety of space time there is an unknown substance connecting visible mass, and altering the composition of the universe. She hints towards an elusive particle comprising dark matter.

Next, the audience’s attention was directed to The Large Hadron Collider (LHC). This particle accelerator is the largest in the world, colliding protons at nearly the speed of light. LHC scientists are hoping to not only detect subatomic particles, but also find physical proof of a dark matter particle.

Swinton then moved back in time, describing the beginning of time, space, and matter. The energy from the big bang created particles, which formed atoms and eventually molecules. Over millions of years, dark matter’s pull became so intense it attracted regular matter and formed the structure of the universe. Ultimately, dark matter’s perplexing existence brought the world to fruition.

Here, the show illuminated the early scientists who first theorized alternate matter. First there was Fritz Zwicky, a Swiss astronomer at CalTech. He analyzed the bizarre behavior of high-velocity spiral galaxies, which seemingly defied the universal laws of physics.

It wasn’t until nearly 40 years later that Zwicky’s research was further developed. Astronomer Vera Rubin compared the orbital speeds of the Milky Way galaxy and the neighboring Andromeda galaxy. According to Newton’s Universal Law of Gravitation, the external star systems should be exceeding escape velocity and flying out of the galaxy. Rubin came to the conclusion that a nearly undetectable form of matter must be holding astronomical bodies together.

Rubin’s discovery acted as a catalyst for the search for dark matter. Scientific understanding primarily concerns visible matter, but dark matter barely interacts with much of the visible universe. This makes its detection difficult, but extremely appealing.

Next, the show explored some of the projects dedicated towards finding tangible proof of dark matter, and hopefully more insight into its function in the universe. The planetarium screen brings the audience back down to Earth to visit the Sanford Underground Research Facility (SURF). SURF is home to the Large Underground Xenon Dark Matter Experiment (LUX), which hopes to detect and photograph a dark matter particle collision.

Another facility the show traversed is the European Center for Nuclear Research (CERN) in Geneva, Switzerland. CERN is where the aforementioned LHC is located, a 17 mile stretch of complex “tracks” instigating proton collisions. The show demonstrated the internal workings of the LHC by simulating a proton’s race around the track and the eventual collisions. Scientists at CERN are hoping to use the LHC to create a dark matter particle in one of the many collisions.

The show ends on a more introspective note, commenting on the incredible collaboration and motivation scientists around the world possess when it comes to the search for dark matter particles. Swinton concludes the production by telling the audience: “It’s the big questions that bring humankind closer together as we strive to understand the workings of this vast universe and our place in it.” 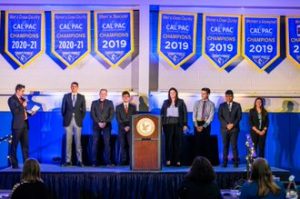