Summary: Although Beijing explained the move as a way to deter future conflict, it will likely use the accelerated buildup of nuclear weapons as an intimidation tactic to deter meddling in its operations within the South China Sea. This includes a likely effort to prevent involvement from other powers in a possible conflict with Taiwan, referring to recent pushback to Beijing’s contested influence in the region.

Background: On 9 April, a number of individuals close to Beijing leadership released public statements regarding Beijing’s newfound need for a larger nuclear deterrent against foreign powers, according to the Wall Street Journal. Additionally, these insiders claimed that Beijing feared there exists efforts backed by the United States and its allies to attempt an “overthrow” of the Chinese Communist Party (CCP). This comes amidst confirmation that Beijing recently completed the construction of an estimated 120 nuclear missile silos this year. Satellite imagery first discovered the existence of these new nuclear silos, located near Yumen in the Gansu province back in early 2020. Beijing initially denied their existence, as well as any efforts to dramatically increase capacity for nuclear silos. Additionally, previous statements by Beijing officials included plans to increase the nation’s total nuclear arsenal to over 1,000 nuclear warheads by the end of the decade, including the implementation of new long-range DF-41 intercontinental ballistic missiles; by current estimates, Beijing possesses around 350 total nuclear warheads in its arsenal.

Growing Resistance to Beijing: There most likely exists a concern from Beijing surrounding the growing resistance to the country’s influence in the South China Sea, namely from nations such as Australia, New Zealand, Japan, and the United States. On 16 April, Tokyo reaffirmed its commitment to a bilateral alliance with the United States, citing the national security threat posed by Beijing as its main reasoning. This commitment follows a trend in recent years where the Japanese military steadily began remilitarizing (a move that continues to see heavy criticism from Beijing) due to the rising tensions in the Indo-Pacific region. With this in mind, nations such as Australia and New Zealand recently decried a security deal drafted by Beijing which allows the Chinese navy to station troops and vessels in the Solomon Islands; this location serves as a vital node for trade in the region, connecting important shipping lanes to Australia and New Zealand. Although Beijing and Honiara made several attempts to put down fears surrounding what the deal entails, Canberra officials continue to take a hardline stance against it and called on other nations in the region such as Indonesia to stand up against the deal. To make up for the rising confidence of its opposition, Beijing will likely need to find a different approach if it wishes to achieve its goals in the region, as its surreptitious actions become more noticeable.

Similarities Between Taiwan and Ukraine: Beijing also likely learned from the actions of its counterpart in Moscow regarding its handling of Ukraine. Throughout the current Russo-Ukrainian War, Beijing officials made numerous statements regarding their decision to remain neutral throughout the conflict despite their deep ties to Moscow. However, a retired Chinese military officer tied to Beijing’s nuclear program claimed Kiev’s decision to turn in its nuclear weapons back in 1994 inevitably led Ukraine “into a situation” with Moscow. There does not exist much evidence as to whether Moscow intends to use nuclear weapons in the conflict, but international onlookers noted that the threat of nuclear war currently dissuades most nations from directly intervening in the conflict. Chinese Foreign Minister Wang Yi made remarks earlier this year stating the difference between the Ukraine and Taiwan situations, yet only gave the reason that he considered Taiwan as a “purely domestic affair” rather than a foreign one. The Chinese military recently began using advanced stealth fighters to patrol the South China Sea and performed military drills around Taiwan during a visit by lawmakers from the United States. In this sense, Beijing could likely shift towards a new, more aggressive strategy against Taiwan.

Outlook and Implications: The decision to dramatically increase nuclear production by Beijing likely intends to dissuade other nations from interfering in its effort to seize claims in the South China Sea, and government insiders probably used the idea of a plot to overthrow the CCP to mislead foreign powers. This may also explain why those close to the government allowed the release of statements regarding the buildup, since the CCP likely wants foreign nations to possess this information. Beijing certainly does not like nations showing solidarity against the moves it wishes to make in the region, and it could likely use the threat of nuclear weapons as an offensive measure rather than a defensive measure. If Beijing started a military conflict with Taiwan, it would likely utilize the threat of nuclear war to intimidate others from intervening in said conflict. Whilst this would certainly cause an uproar in the international community, it may allow Beijing to take its objective almost unopposed. 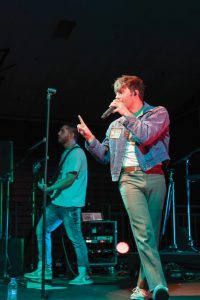 Next post Rockin’ to the Max: BCA Hosts First Concert at Prescott Campus