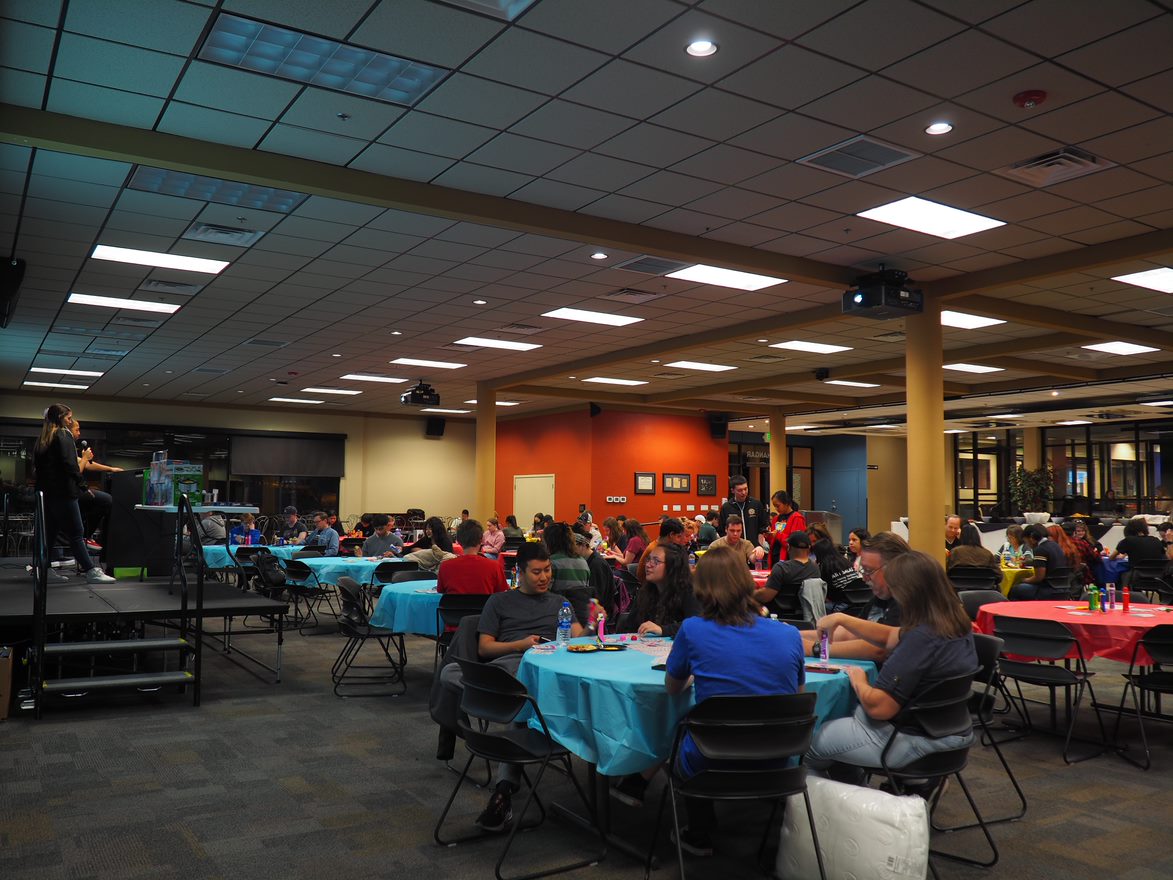 On Friday, April 1, 2022, at 7 p.m., the Board of Campus Activities (BCA) hosted a Bingo Night event in the Lower Hanger of the Student Union. Attendance was free not only to Embry-Riddle Prescott students, but also to their parents and families, many of whom showed up as the kickoff to Parents and Families weekend.

A decent amount of students and families showed up to the event, with the Lower Hanger being around three-quarters full of students sitting at large, separated, round tables in the main Hanger, while the back area was full of food-containing tables with a variety of snacks (Oreos, carrots, hummus, pretzels, chips, and more were all included).

Once the actual games started, after some slight technical difficulties involving how fast the numbers were called versus the attention span of attendees, students and families alike seemed to have a good time, with everyone eager to win one of the many prizes, which consisted of everything from a Crock-pot Slow Cooker, waterproof speakers, blankets and stuffed animals, to the infamous “Embry-Riddle Football Undefeated” T-shirts.

Attendees showed their excitement for the game in a variety of ways, from “Beep”-ing on demand to shouting in excitement whenever they got a number – even if it wasn’t a Bingo. The room was loud enough for most of the night that it was sometimes hard to hear the numbers or what variation of Bingo was happening next.

Achieving a Bingo afforded the winner a prize.However, due to the frequency of Bingos and the number of attendees (especially later in the night, when two or three games would be played on one card), prizes were limited to one per person. Attendees who won were thrilled to be able to select their prizes. All prizes had been handed out by the end of the night.

BCA was even kind enough to take pity on some attendees with bad luck – one table of four people only won one prize the entire night, but were creative enough to make various origami creations out of their used Bingo sheets, and so were given some football shirts.

Various attendees shared their thoughts about the event. Aerospace Engineering sophomore Hoa Nyguen said she enjoyed the event “because it was fun hanging out with friends.” Aerospace Engineering sophomore Chloe Reed remarked: “Bingo night was really fun! There were lots of prizes and it was cool that a lot of parents and siblings were there for family and friends weekend. I scored a T-shirt!”

Commenting on the soundtrack of the night, Junior Rita Tagaroa said that the “music played highlights [the] need for a karaoke event.” Indeed, many of the attendees were seen or heard singing along to some of the tracks played, like “I’ll Make a Man Out of You” from Disney’s “Mulan,” or ABBA’s “Dancing Queen.”

Overall, the Bingo Event was a hit. The night was a great chance for students to both show their families some of the fun students can have here at Embry-Riddle and unwind a bit from the constant cycle of midterm exams and quizzes before finals. It seems students would certainly like to see more of these events in the future, perhaps including a karaoke event.