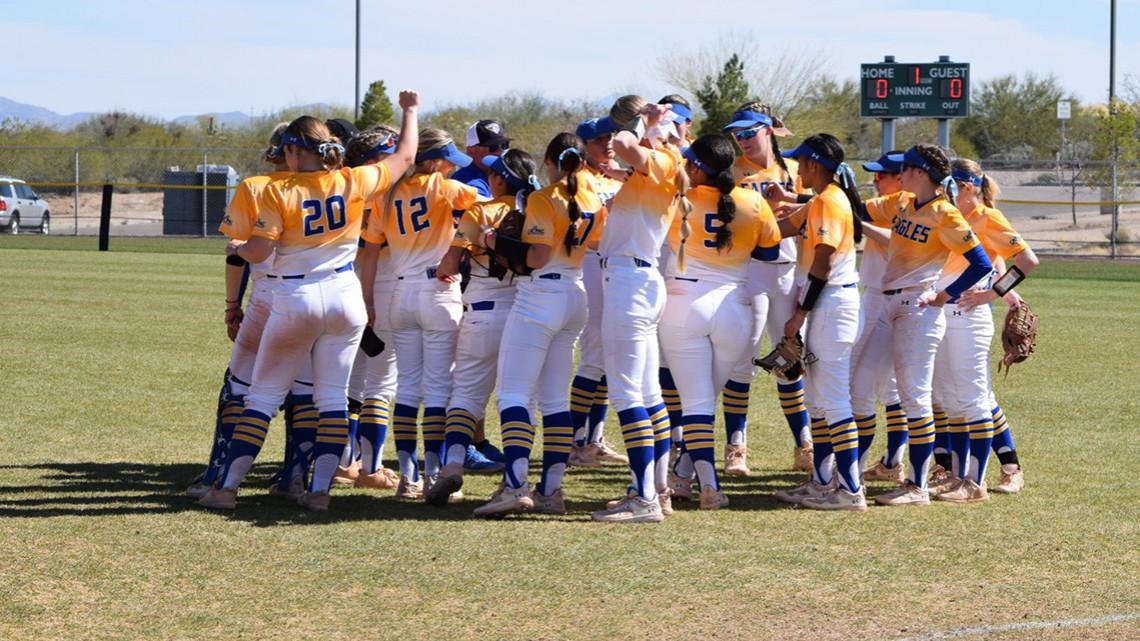 TUCSON, ARIZ. – The Embry-Riddle softball team finished its time in Southern Arizona strong, getting its fourth-consecutive doubleheader sweep on Wednesday. The Eagles beat Tabor College twice for the second consecutive day, nd outscored the Bluejays 26-1 over 11 innings of play.

The Eagles jumped on the board right away on Wednesday morning, scoring two runs in the top of the first. Mikaeli Davidson hit an RBI triple, then was singled home by Sam Holbert to give ERAU the 2-0 lead.

The score stayed at 2-0 until the sixth inning, when Embry-Riddle broke the game open. The Eagles scored seven runs in the top half of the sixth, setting themselves up for the run-rule victory.

In the sixth, the Eagles had seven of its 11 hits, and a pair of RBI triples. Sam Holbert drove in two with her three-bagger, and Jaden Espinoza brought home Shaylee Sanders with her triple. In all, five different players ecorded at least one RBI during the seven-run inning.

Espinoza, Davidson, Holbert and Maddie Judge each had two hits in the first game on Wednesday, and those four were responsible for six of the nine RBI for the Eagles. Diana Miranda Montano also drove in two runs, bringing across a pair with her single in the sixth.

Davidson was dominant in the circle once again, giving up just one unearned run and striking out four in the six innings. Davidson is now 4-0 on the season, and has been charged with just two earned runs in 25 innings of work so far.

On Monday, the Eagles got a perfect game in the circle, and they did not have to wait too long or another special performance from a pitcher. In her first career collegiate start, Marissa Sanchez recorded a no-hitter and a shutout to keep Embry-Riddle undefeated.

Sanchez had just two baserunners all afternoon, and struck out six. She retired the final seven batters in order, and had three strikeouts in the final stretch.

The offense was equally as excellent, scoring in all five innings and recording 18 hits. The Eagles had two big innings, scoring eight runs in the 2nd and seven runs in the 4th to force another run-rule victory.

Four errors in the second inning by Tabor allowed ERAU to take advantage, as the Eagles went on a hit parade en route to scoring eight runs. The Eagles recorded six hits, and four different players drove in runs to jump out to a 9-0 lead.

After adding a single run in the third, the Eagles added seven more in what would be its final set of at bats. This time around, ERAU got eight hits, and five different players recorded a RBI.

Lily Anderson was a perfect 4-for-4, driving in a pair of runs and scoring three times herself. Kristin Valido was also perfect at the plate, getting two hits in two at-bats, plus walking once.

Miranda Montano was 3-for-4, her biggest hit being a two-run double in the fourth. Natalie Gonzalez and Tatum Chestnut also had two hits each, and Davidson hit her NAIA-leading third triple as a pinch hitter. 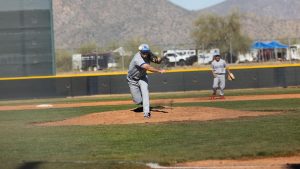