On Jan. 25, 2022, between 6:30 p.m. and 8:00 p.m, the Spring Organization Fair took place at the Eagle Gym. Here, clubs would present themselves to attendees and explain who their club is and what they do, hopefully getting some interested people to sign-up for meetings. Around 50 clubs and organizations were there, including, but not limited to, the Association of Former Intelligence Officers (AFIO), the AIAA Design-Build-Fly Club (DBF), the Advanced Polytechnic Engineering Experience Club (APEX), the Eagle Makerspace, the Rocket Development Lab (RDL), and the Floating Eagles, a recent club that rides one-wheels, self-balancing one-wheel electric skateboards. Various fraternal and sorority groups, the Student Government Association (SGA), the Board of Campus Activities (BCA), the Student Veterans Organization (SVO), and Horizons Newspaper also made an appearance.

There were various things attendees could do when interacting with clubs and organizations. They could get free pizza from the BCA table. At the SVO table, they held a free ticket raffle prize, and the winner, who was announced the next day, won a $20 SVO Snack Bar Gift Card. Additionally, attendees could see the Floating Eagles ride around on their one-wheels. Some of the Floating Eagles offered others a chance to ride their one-wheels under their watch.

Unfortunately, some tables believed that the attendance was low, possibly because the spring fair was not advertised as much compared to the fall fair. Jacob Lackey, who ran the APEX table in front of the entrance, did not recall a lot of attendees entering the gym. He claimed, “There were a lot of officers at tables; some looked like they had six officers, I think, but not that many attendees.” Despite the apparent low turnout, others looked on the bright side. Michael Finigian, who helped run the DBF table, stated, “We got six people to sign-up at the fair. While we usually get twenty to thirty people, we are excited about those six people showing up at DBF.”

Overall, the people who went to the Spring Fair Club had a good time. Even with the low turnout, many clubs were still able to receive at least a few signatures, and hey, a few signatures are better than nothing! For people who were unable to make it to the fair for whatever reason, they can go visit Eagle Life and see all the clubs and their events on the website. A link to Eagle Life is provided here: [https://eaglelife.erau.edu/home_login]. 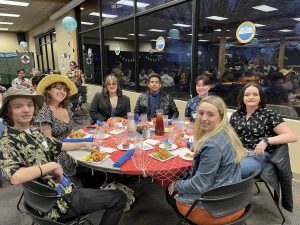