Yule (pronounced EWE-elle) is a winter holiday celebrated by the Wiccans, the largest branch of Neo-paganism. For those unfamiliar with Neo-paganism, it is a general term to describe new religions that are influenced by historical pre-Christian beliefs. It is celebrated between December 20 to December 23, depending on what day the winter solstice is. Additionally, it is one of eight festive holidays of Neo-paganism’s Wheel of the Year.

For some background, Yule was celebrated by Germanic people in central Europe and Scandinavia. They celebrated the winter solstice by feasting and merrymaking, as well as sacrifices in some areas. While most Germanic people converted to Christianity during the 700s to 1000s, many of the Yule traditions, such as the Yule block (Christmas block), the Yule boar (Christmas ham), and Yule singing (wassailing) evolved into present-day Christmas traditions. Modern-day Wiccans also use these traditions when celebrating Yule. Wiccans usually celebrate Yule alone at their residence or with a coven, although in 2007, two Yule ritual celebrations were available for the general public to witness at Unitarian Universalist Church of Lancaster in Lancaster, Pennsylvania.

Most Wiccans, celebrate Yule for the  “rebirth of the Oak King, the Sun King, the Giver of Life that warmed the frozen Earth. From this day forward, the days would become longer (The Celtic Connection 1997).”  Various other gods and goddesses that are celebrated in Yule include Brighid (Irish), Isis (Egyptian), Demeter (Greek/Roman), Apollo (Greek/Roman), Ra (Egyptian), Odin (Norse), Lugh (Irish), The Oak King (Celtic), and The Horned One (Celtic). One ritual that is conducted involves the Yule’s log, which is instructed to be harvested from the Wiccan’s house or given as a gift. The log is placed into the fireplace, decorated with seasonal greenery, doused with cider or ale, and dusted with flour before being lit on fire by a piece of last year’s log. The log burns throughout the night and then smolders for 12 days. There are also activities for children to enjoy such as creating Sun Bursting ornaments, adorning the Yule log, and painting Terra-Cotta pots.

Traditional foods and drinks that are consumed during Yule include pork and turkey dishes, fruit, nuts, cookies, cider, eggnog, and ginger tea. A Wiccan website that has been active since 1997, The Celtic Connection, offers the recipes for various Yule dishes including Shortest Day Ham Loaf which serves 10 to 12 people, Roasted Lamb Feast for a (Sun) King which serves six people, and the dessert The Best for Last Bars which serves six people.

In addition to feasting and various rituals, Wiccans also celebrate Yule by gift-giving. These gifts can include candles, stones/crystals, a tarot box full of tarot cards, herbs, incense, and essential oils. For specifics, stones/crystals for Yule include rubies, diamonds, and emeralds, herbs include evergreen, mistletoe, and oak, and incense include pine, cinnamon, and cedar.

To all our Wiccan readers, Horizons Newspaper wishes you a Happy Yule! 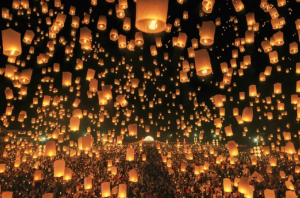 Next post Winter Holidays Around the World: Thailand’s Loy Krathong