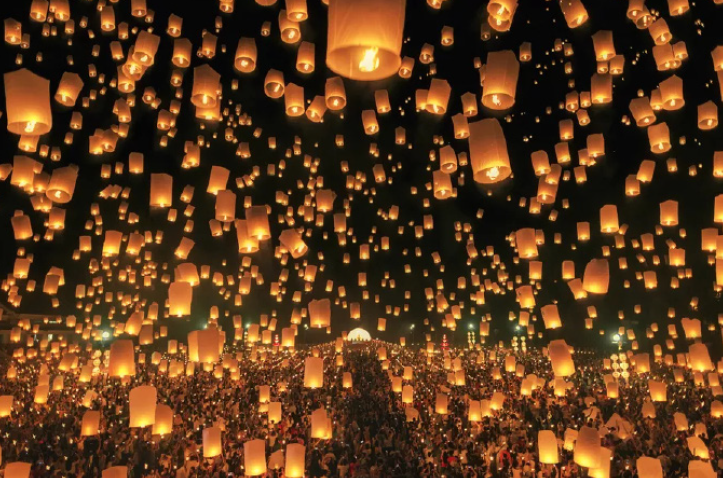 Loy Krathong, the festival of light, is one of the largest annual celebrations in Thailand. The dates are dependent on the Thai Lunar Calendar, so the event takes place on the evening of the twelfth full moon of the year. Loy Krathong is usually a three day long affair, but will go for five days in the ancient city of Sukhothai.

The holiday is celebrated by many Eastern and Southeastern Asian countries, including Laos, Northern Malaysia, Sri Lanka, Shan in Myanmar, Cambodia, and Thailand. Sometimes it is called a different name, but the meaning and practice of Loy Krathong stays relatively the same.

This year, Loy Krathong took place on the 19th of November, marking the end of the rainy season and the beginning of a new phase for the country. Loy Krathong is technically a secular holiday, but many citizens pray and give thanks to the water goddess Phra Mae Khongkha, asking for forgiveness for using too much water or contaminating it.

To celebrate the goddess, Thai natives will create lotus shaped banana leaf boats called krathongs, traditionally adorned with three sticks of incense and a lit candle. Sometimes, people will also decorate the boats with locks of hair or coins. Each candle has a prayer or memory associated with it, giving intention to each krathong sent downstream.

Loy means ‘to float’, signifying the graceful departure of the krathongs along waterways across the nation. Sending the krathongs downstream symbolizes letting go of past negativity and misfortunes, and welcoming good fortune. Since the holiday is a celebration of the water goddess, the krathongs can be released in any body of water to honor Phra Mae Khongkha.

It is common during the festival for people to wear traditional Thai clothing. Beauty pageants are held across the country, and the contestants parade through the streets. Some of the most lively places to celebrate Loy Krathong in Thailand are Bangkok, Chiang Mai, Phuket and Sukhothai.

Loy Krathong, a festival of light, intention, honor and water, has been observed for over 800 years, and will be celebrated again next year on November 9th. Even if you do not come from Thai ancestry, you can still participate in the intention of the festival by lighting a candle and letting go of your past misfortunes to welcome the future.