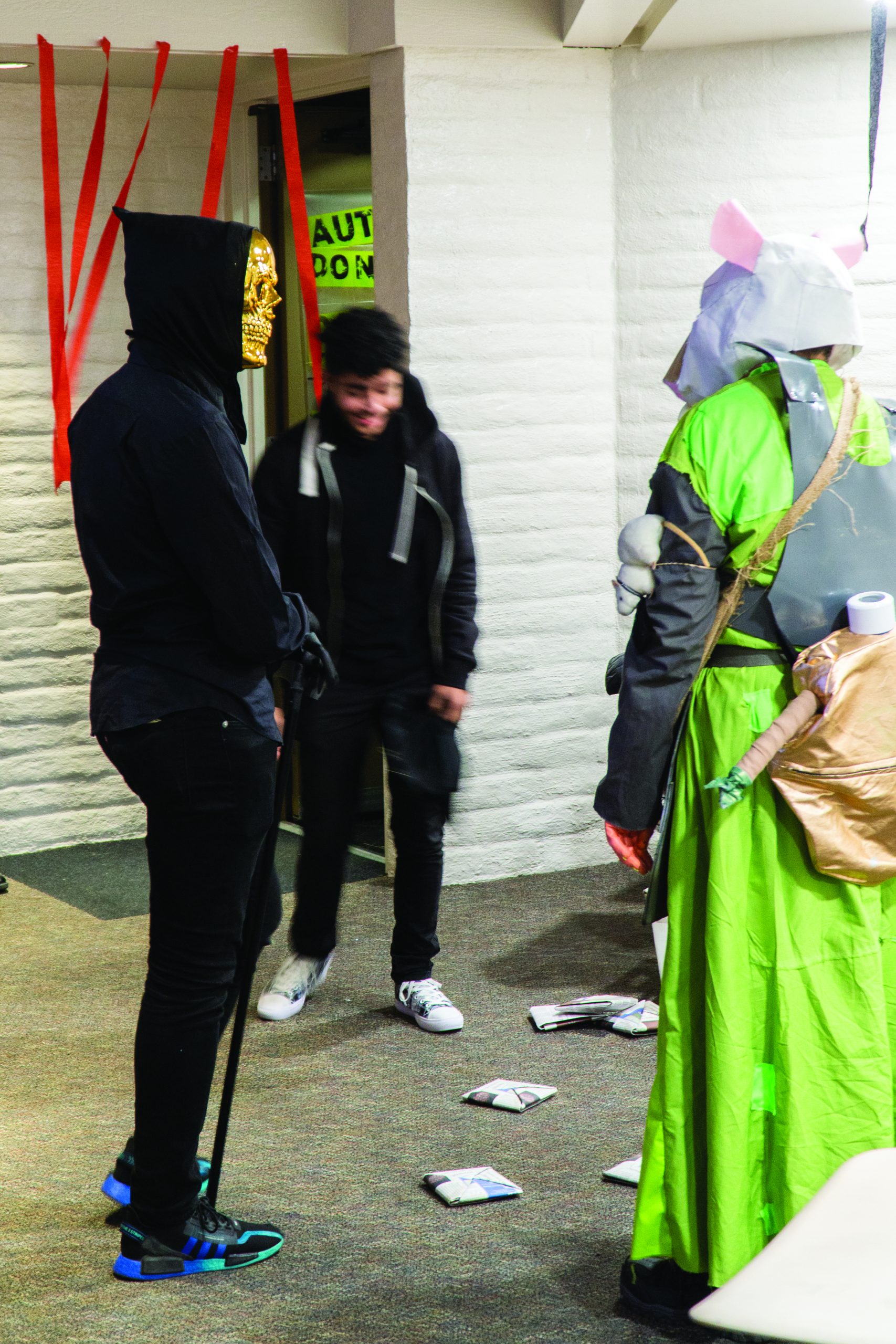 On Friday, Oct. 29, the Grim Reaper, witches, ghosts, maidens fair, and anthropomorphic rats all paid a visit to the Davis Learning Center (DLC) at Embry-Riddle’s Prescott campus to collect their share of treats – although those treats were more than just candy. Participating students or supernatural creatures had the opportunity to get candy, cupcakes, cookies, custom-painted 3D-printed skulls, and their own handmade pipe cleaner q-tip bridges, as well as the chance to get their hand or face painted.

The DLC was a hub of activity, with each room hosting a different trick-or-treat activity, and some small games outside as well. The outdoor activities included a large game of Jenga as well as a game of cornhole, set up outside of the auditorium entrance facing the Student Union.

Inside one of the rooms, students could not only get candy, but could also paint 3D-printed skulls to take home with them. The organizers provided a variety of colored and glittery paints, as well as paintbrushes and mixing bowls to give students many ways to paint their skulls.

Another room offered students the opportunity to enjoy a classic sport, bowling, but with a twist: instead of bowling balls, students would hurl ‘pumpkins’ at rolls of paper towel with faces drawn on them. Although pumpkin bowling is somewhat different, and perhaps more challenging than regular bowling. At least one student managed a strike, and with four pumpkins per student, many people managed to knock down all the pins in the end.

Also in the pumpkin bowling room was the opportunity for students to make bridges out of q-tips and pipe cleaners. Included at the front of the room were examples of beautifully made bridges, and a variety of colorful, sparkly, pipe cleaners were provided for students to make their own bridges, using q-tips as joints to support the pipe cleaner truss structure. Once students had made their bridge, in whatever form it may have taken, they were free to take it home.

In another room, students could get candy, but talented volunteers from the Society for Physics Students also provided guests the opportunity to get a painting of their choice made on their face, or if they preferred, their hand. Art varied from masks from the popular TV show “Squid Game” to animated dragons. If attendees weren’t in the mood for art, perhaps because they already had an entire costume on, there was also an opportunity to take photos in front of a photobooth background with a variety of props.

There was also a room that was simply a no-frills added trick-or-treat experience, with dim lighting to set the mood. In yet another one of the DLC’s surrounding rooms was a room themed after the TV show “Squid Game”, in which students could throw folded up Horizons Newspaper issues at other folded up papers on the ground, with the apparent goal of flipping the papers on the ground over, as well as other activities, all while listening to music from the show.

Although the adjoining classrooms all had their own exciting events, the main event was in the DLC auditorium. Jordan Lowry, a volunteer at the event, described itas “a cakewalk event.” This event was a single game in the style of freeze-dance, where participants would dance-walk around an ellipse made of numbered pieces of paper on the auditorium stage while listening to Halloween music. When the music stopped, a number would be drawn at random, and the lucky student who ended up standing on that number would get their choice of candy, cookie, or cupcake.

Although the event was hosted by the Woman’s Ambassador Program, multiple clubs participated, each room run by a different club. The Society of Women Engineers, The Society of Physics Students, and the International Students Organization all participated in the event as well. The Board of Campus Activities (BCA) also helped coordinate the event.

Lowry said that the planning process consisted of talking to BCA to coordinate the event, getting it approved by SGA, and then going “Halloween decoration shopping” and setting up for two hours before the event.

Lowry says that she estimates about 100-200 people showed up to the event. Whether they were ghouls, ghosts, skeletons, or simply the scariest creature of all, the college student, they were sure to have a great time, add some candy to their pockets, and get some unique keepsakes as well.