ROSARIO- Put the gun down, Michie. There’s no need for that here.

Michie tenses up even more and raises the gun higher.

MICHIE- There is when there’s a zombie down here.

Her blood froze. How did she know? When did she find out?

ROSARIO- There are no zombies here, Michie. The sensors would have killed them when they touched the perimeter. You were the one that showed me that, remember?

MICHIE- I also showed you that there were gaps. If someone knew where they were…

ROSARIO- Listen to yourself Michie, what zombie would be smart enough to not set any of them off?

Saw? What did she see? Rosario had taken every precaution. Not even Nick could’ve been onto her yet! So what did Michie know?

ROSARIO- Well, you’ve obviously made a mistake. No one can do what I do and be undead!

It’s not a lie. Not quite. At least that’s what she told herself to ease the heavy feeling in her chest.

MICHIE- You talk big, but you’re really just worried about saving your ass. What about me, Rosario?! What about that kid? You fine with us dying if it covers your undead ass?

ROSARIO- What are you talking about? I would never do anything to hurt Eva!

And she hadn’t, she was still normal, trustworthy, human. She hadn’t endangered anyone! Michie, though, she was out for blood.

She looked around. Talking wouldn’t get her anywhere so she’d need a well-timed escape. As if someone had heard her pleas, footsteps started to descend the stairs. Just a little more…

ROSARIO- I couldn’t hurt any of you! You’re making a huge mistake!

Nick’s face came into view as she said that. His eyes grew big flicked back and forth, from Rosario, to Michie, to the can on the floor, to Rosario, to the shotgun Michie was aiming straight at her temple. He rushes down the rest of the stairs, towards Michie. The distraction she had been hoping for.

NICK- What the hell are you doing?!

Nick rushed over and created more distance between the two women.

MICHIE- Get out of here, Nick. It’s not safe.

NICK- If you’re referring to the fact that you have a gun pointed at someone, then I agree.

Nick slyly reached towards the gun, but not slyly enough as Michie jerked it away from his grasp almost immediately.

MICHIE- It’s not a someone, it’s- Where the hell is she?

Rosario ducked back out of sight as Michie began to look around wildly. She snuck around the storage room to hopefully position herself behind Nick and towards the stairs. But right as she was getting close to safety, Michie fired a “warning shot” into the wall behind her. The air buzzed as she felt the slug graze her ear. It didn’t take long to realize a chunk of the ear was missing, with her blood matting her long hair. She dared not make a sound, unsure whether Michie meant to hit her.

MICHIE- Stay away from him, you undead bitch! Nick, listen to me. Get. Away. From. Her.

NICK- Uh – Undead?! Michie, you of all people should know one of them couldn’t possibly get in –

Michie gestures at me with her gun. When I follow her gesture, my heart stops. I quickly try to cover my injury back up with my jacket without him seeing.

MICHIE- Why are you hiding your shoulder, Ros?

Although her eyes burned with anger, her tone was almost disgustingly sweet. I look up and see Nick staring at me, cogs turning in his head.

NICK- Is that why you’ve been keeping your jacket on inside recently?

I look away from him and try to stare down Michie, using the same sweetness she did.

MICHIE- Weird, I could have sworn you mentioned not getting cold very easily.

She lowers the gun again as if to shoot and pulls the trigger. I duck. Nick tries to grab me but ends up getting a fist full of my jacket instead. I shrug him off only to realize no bullet has been fired. Nick is staring at my shoulder.

NICK- What is that?

The emptiness in his voice makes me want to cry. I make a half-hearted attempt to cover it with my hand.

ROSARIO- It’s just a scratch I got while gathering stuff. I thought it was nothing.

For the first time in a while, I wasn’t lying. I really had brushed it off until…

NICK- Then, why didn’t you let me see it when it got worse?

My voice started to give out as tears formed in his eyes. Nick moves my hand and sees my wound for the first time.

MICHIE- What did I tell you?!

Nick repeats my phrase numbly and runs his fingers over my wound. He looks over me before turning and leaving the room. I sunk to the ground, it was over. Everything I had worked so hard for was gone. Then my emotional pain was bested by a sharp pain in my head before darkness.

When I woke back up, I saw Nick turn to leave again. I tried to grab his arm but he moved his body away from me.

NICK- Try not to kill her while I’m gone.

Nick pushes past and goes upstairs. Michie turns back to me. I couldn’t meet her eyes, they were so full of anger and hatred.

MICHIE- If it were up to me, your guts would be wallpaper.

ROSARIO- How long have you known?

MICHIE – How long have you been infected?

A non-answer, how predictable. I looked away. How long had I been like this? How long had it been since I was actually warm?

MICHIE- Don’t answer me and I won’t answer you. I’m not gonna just wait for you to open up either, there are lots of things you can do to a zombie.

She began to sharpen the survival knife on her hip. Panic started to rush through me.

ROSARIO- He told you not to hurt me!

MICHIE- He told me not to kill you.

ROSARIO- You can’t just stab a person for doing what not doing what you want!

MICHIE- You’re not a person, you’re a fuckin’ monster!

NICK- Maybe not completely, but there’s some truth to it.

Nick was standing behind us at the bottom of the stairs. I couldn’t tell how long he’d been standing there. He was expressionless, not giving attention to anything but the paper in his hands.

NICK- The transformation is happening more slowly in her, so she’ll be one of us for a while longer.But, you’ve dismantled our trust and put the people who gave you everything in danger just so you could live another day. That’s more than monstrous, if you ask me. 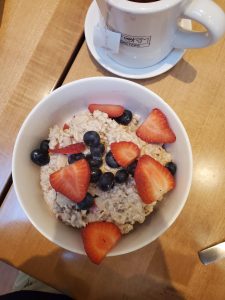 Next post A Hidden Gem in the Square: The County Seat Café

By Julian O’Connor, Chief Copy Editor  How does one wake up in space if there are multiple sunrises and sunsets...

By Taylor Brown, Editor In Chief  *opinion disclaimer here*   One of the many values the United States was founded upon...

By Taylor Brown, Editor In Chief   papa drove slowly.  so goddamn slowly,   each stop sign was a timeline of its...