The Rocket Development Lab (RDL), one of the largest student run groups on campus, has many sub-groups, each of which work on their own project to support the club’s goals of teaching students more about the different aspects of rocketry, as well as developing technology for their space-shot attempt, the Mountain Spirit Program.

The phenolics group of the RDL is focused on improving the existing ablative liquid engine technology on campus by using phenolic resin instead of high temperature epoxy.

Ablative rocket engines are a type of engine that is designated by how well they deal with extreme heat. Other types of engines use cooling fluid such as water, or, in the case of industry engines, fuel, to cool the engine by running the cooling fluid around the chamber. However, this kind of cooling is both complex and expensive, making it impractical for students to do on a regular basis.  Ablative engines, on the other hand, use material for the chamber that is designed to ablate, or slowly flake away, under extreme heat. This is the same kind of technology that is used on ablative heatshields like those on space capsules. Although this technology does not allow reuse of the chambers as easily, it is much simpler and cheaper to make.

The current ablative technology on campus uses silica sheets coated with high temperature epoxy to make throat inserts for the ablative chambers (a throat insert being an additional piece of material that is inserted into the throat of the chamber). However, although high-temperature epoxy is easy to obtain and use and works well for the RDL’s purposes, it is not the industry standard for ablative chambers.

Instead of high-temperature epoxy, the industry uses phenolic resin, which, according to group lead Benjamin Black, is the best possible option for ablative chambers, used by SpaceX and NASA. The RDL has been looking into using this resin for the past two years, but progress has been slow due to the fact that phenolic resin is a dangerous substance requiring great caution to work with.

However, the students of Embry-Riddle are highly capable in their fields and are well aware of the risks of working with phenolic resin and have recently received permission from Campus Safety and Security to use it on campus, as they are fully able to mitigate the risks. Because of that, the phenolics group of the RDL has now moved into high gear, changing from research to practical testing.

The phenolics group has recently completed their first layup of a test insert using phenolic resin and is looking forward to conducting more. 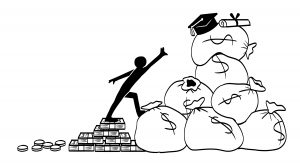