BCA’s latest event had the Embry-Riddle Prescott community clapping their hands and singing along not only to new musical hits but also to popular oldies. It was a great opportunity for many who attended to experience their first acapella concert. The small turnout made the concert more intimate and gave everyone a chance to sing along without worrying about bothering others around them.

On September 17, the acapella group Backtrack Vocals performed in the DLC. They flew in from New York just for this performance and had to fly back the same night. The group was excited and happy to perform for Embry-Riddle students.

Backtrack Vocals consists of two beatboxers and three singers. Craig Simonetti is the main beatboxer of the group. JoJo Otseida is the second beatboxer, but he also serves as the group’s bass singer, often hitting impressive low notes in songs. Melissa Jordeno sings alto, and Mallory Moses sings soprano. With nice harmonies and a great personality, Mike Hinkle rounds out the singing trio.

The night started out with an introduction of the group by Wilson Tadena, the Assistant Director of BCA. Backtrack Vocals then launched into an amazing rendition of the famous Black Eyed Peas song “I Got a Feeling.” From there, they jumped to the second decade of the 2010s with “No Tears Left to Cry” by Ariana Grande and then back to the late 1960s with Michael Jackson’s “I Want You Back.” By that time, they had the whole audience singing along.

Backtrack Vocals delivered an impressive variety of songs, including a mash-up of Dua Lipa songs, a modernized Beethoven mix, a large collection of Temptation songs, and even the piece “This is Me” from the musical The Greatest Showman.

They also performed an original song “A Love Song” written by Jordeno. The same song was also sung by Jordeno’s friends at her wedding when she was walking down the aisle.

The group sang an entertaining version of “Hit ‘em Up” by Blu Cantrell, and then another uplifting and happy mix that included “Shining Star” from Earth, Wind & Fire, “Funky Town” from Lipps Inc., “Give Up the Funk” by Parliament, and the classic “Celebration” from Kool & the Gang. They closed out the night with one of Meghan Trainor’s biggest hits “No.” All songs were accompanied with various dances.

Besides performing songs, Backtrack Vocals also demonstrated to their audience how they build their arrangements to create a final product. When Otseida started on bass, Simonetti added percussion to the beatboxing, Jordeno chimed in with some background humming, and Hinkle harmonized with her. Finally, Moses, who took the solo for this song, put words into the mix. The result was a laid-back, stripped-down version of Ben E. King’s “Stand by Me.”

In between songs, the members of Backtrack Vocals told the audience more about the history of the group. They started posting their songs on YouTube in 2013 and had their first live performance sometime around the years 2015-2016. The group does not have steady members. Since its formation, many of them have been replaced, so people were warned that in older arrangements on YouTube, they might see different singers than those who were on the stage that night.

Aside from their talented singing, Backtrack Vocals also showed off their ability to make different types of sounds. Simonetti demoed some freestyle beatboxing. Jordeno then demonstrated her siren sounds; the others joked that she sounded like a real siren. The singers also produced a series of bell, siren, and horn sounds which, when put together, became a song.

The audience also got a chance to learn how to beatbox. First, Simonetti taught everybody the basic beatboxing sounds using the letters b, k, and t. Then, he split them into three parts, and each was assigned a letter. When he pointed at that group, they had to make that sound. The laughs and happiness of the audience suggested that they enjoyed their attempts at beatboxing.

Overall, positive feedback points to a very successful BCA event. A student, Johnathan Wang commented, “As someone who is part of our Altitunes Choir here and has a music background, I thought tonight’s performance/event was awesome; it brought back even more excitement for me to resume choir and be able to sing with my peers again this coming Sunday!” However, he did wish that there would have been more audience participation. Tadena said, “It was my first time seeing an Acapella group live, and they totally exceeded my expectations. I also enjoyed learning how to beatbox.” On the whole, it sounds like the audience really appreciated the event. 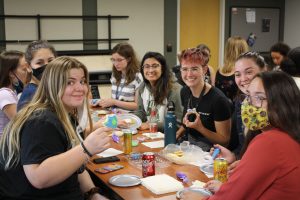