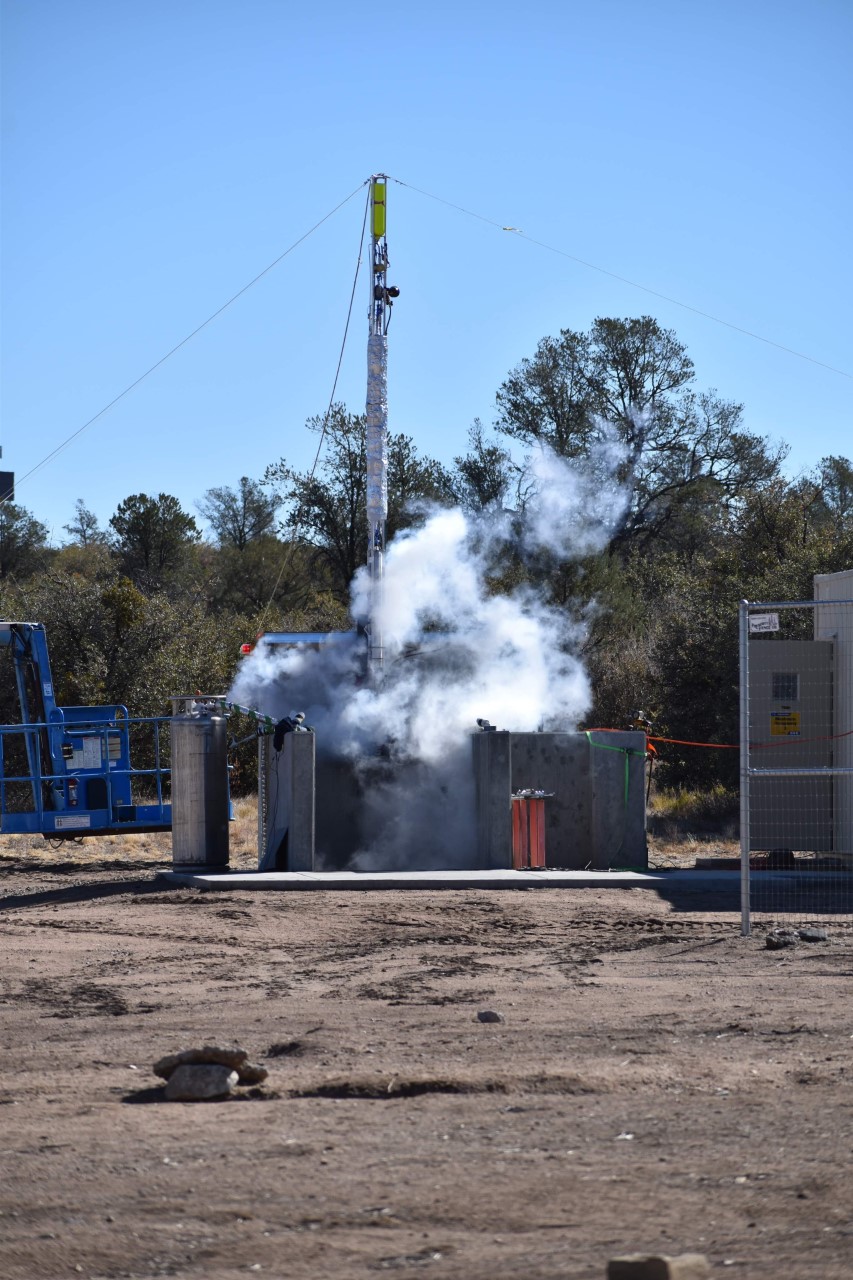 [Image: The Altair flight vehicle during cold flows in the Fall of 2020. Altair is a LOX/Jet-A liquid bi-propellant rocket that will fly in the Fall of 2021 in Mojave, CA to an altitude of 30,000 feet. It will be the first launch of a liquid bi-propellant rocket in ERAU’s history. Credit for Image And Caption: Charles Flaherty/Rocket Development Lab.]

Although many students may not know it, Embry-Riddle Aeronautical University’s Prescott campus has a thriving student rocketry program spearheaded by the Rocket Development Lab (RDL), one of the largest student clubs on campus. In addition to the RDL’s normal programs, the club has also launched a program with an ambitious goal: reaching space with a rocket designed and built at Embry-Riddle, by Embry-Riddle students.

The Mountain Spirit Program, as the initiative is called, has a “driving goal” according to Program Lead Charles Flaherty: “develop a rocket which uses both liquid and solid rocket propulsion systems to reach the Karman Line (100km), which is the edge of space.” The program was, as Flaherty says, originally “a concept that the College of Engineering, specifically the Mechanical Engineering Department, tasked Embry-Riddle Prescott’s rocketry community with completing.”

The program is also “wholly controlled by students”, which Flaherty mentions “is something not often seen in undergraduate rocketry.”

In Feb. 2020, the original goal of “reaching space with a single vehicle that uses both solid and liquid rocket propulsion systems” was announced, and in Fall 2020, “a capstone team, Daedalus Designs, started work on the preliminary vehicle sizing.” However, the work had stalled by Jan. 2021. Luckily for the program, Flaherty says that “the program was revitalized in the Spring of 2021 and work began in earnest late this past summer.”

While the overall goal of the program is to reach space, the technology level at ERAU Prescott is not high enough to simply go straight from the drawing board to a spaceflight-ready vehicle. As with many engineering problems, several iterations will be needed, and in fact, ERAU Prescott’s rocket capabilities will need to be increased significantly before achieving the goal of a spaceflight is possible.

The Mountain Spirit leadership has recognized this, and has therefore split the program into several “blocks”, which, according to RDL President Raj Sadafule, are “small goals”, each one consisting of “a rocket that will break literal barriers of the ones before it.”

Flaherty mentions that the program has already set up its leadership and “coordinated with existing rocketry resources on campus which will form the foundation for future projects.” In addition, the program has “taken a pass at two vehicle designs and determined that each design is feasible to accomplish with the resources and facilities that have been developed, or that are in development, on campus.”

Mountain Spirit is currently working on Block 1, which, from a rocketry aspect, is the development and eventual launch of a liquid-fueled rocket called Altair. The launch of this rocket at “the Friends of Amateur Rocketry launch site in the third week of November” will be, according to Flaherty, “the next major milestone.”

After Block 1 is complete, Flaherty says that “the Janus engine will continue to be developed till a 20 second burn time is achieved, allowing Block 2 vehicles to fly faster and higher than Block 1.” In addition, “in the fall of 2022, Test Cell 4 will be complete, which marks the completion of all major test facilities necessary to support Mountain Spirit’s flight vehicles.”

Finally, Flaherty mentions that “the program hopes to launch its first Block 2 vehicle in the spring of 2023.”

Flaherty says that students interested in either rocketry in general, or the Mountain Spirit Program specifically, “can help in the program by joining the RDL or other rocketry projects.” He also mentions that “New projects are starting in the RDL that are directly, and indirectly, supporting the Mountain Spirit program as well, and the RDL needs more students to help with those.”

Students interested in joining the RDL need only “an interest in rocketry”, according to Flaherty. He also says that “The nice thing about the Mountain Spirit and the RDL is the willingness to take students on and support them in what they are interested in, regardless of major, class standing, or time commitments.”

The RDL’s core goal is to allow “students interested in rocketry to follow their interests,” according to Flaherty. It “works on solid and liquid propulsion systems which are entirely student designed, built, tested, and flown.” The RDL “has flown supersonic solid propellant fueled rockets, operates a liquid rocket engine test stand on campus, facilitates student research projects, and tests all manners of rocketry related engineering projects on campus.”

Both Flaherty and Sadafule mention that interested students should stop by the RDL’s Lab, located in AXFAB 136. Sadafule also says that students can “join the group on Eagle Life” and “come to the informational meetings.”