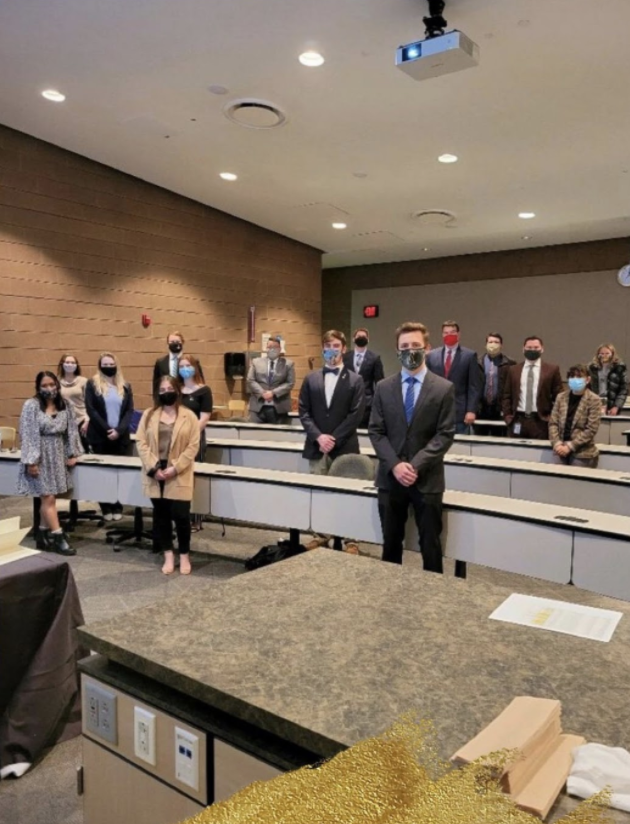 Photo: Order of Omega members at their Spring 2021 Initiation Ceremony.

Due to COVID-19, student led organizations are struggling to retain membership and involvement in their organization while adhering to the social distancing requirements and other safety guidelines. This is even more relevant for organizations that involve a lot of social interaction, like fraternities and sororities.  However, despite these trying times, our organizations have adapted and many have even become stronger than they were before the pandemic.

Order of Omega is an honor society that recognizes students involved in Greek life who have exemplified high standards in the areas of scholarship, leadership, involvement within their respective organization, campus, and local community. During the COVID-19 pandemic, Order of Omega has had some trouble getting their members involved due to the lack of interpersonal aspects that the organization has traditionally had. “It’s just hard, we’ve had some detachment issues from the organization, but we’ve also improved quite a bit from where we were a year ago,” says Order of Omega President Jessica Rader.

Also, Order of Omega recruited and initiated three new members this semester who are the epitome of the values and ethics of their organization. However, despite getting three new members, Order of Omega decided to extend their application deadline in an attempt to grow their organization. This semester, they are also trying to increase the frequency of in-person meetings.

In conclusion, COVID has been a hard time for everyone and every organization has had some trouble adapting to the new normal. However, our students and our student-run organizations have shown tremendous flexibility and grit towards all of the obstacles that they have encountered. Order of Omega managed to not only improve their organization, but to find a new way to give back to the Prescott community. “Even though it’s been hard, it’s also provided us an opportunity to explore new ways of conducting business, and I think we will make this organization better than it’s ever been before on our campus,” affirmed Rader.