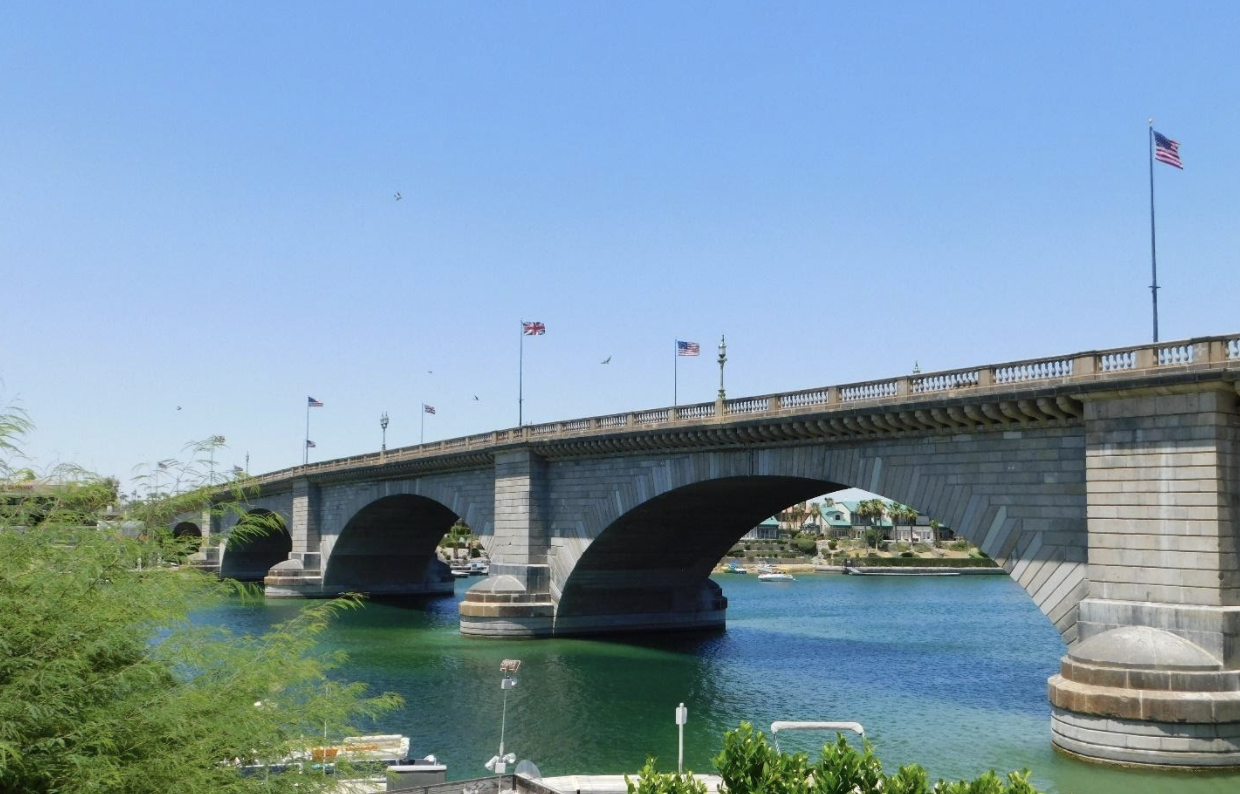 Have you ever dreamed of walking on the London Bridge, but you cannot afford to go to London? Good news! It’s right here in Arizona. Yes, I mean it! The original London Bridge is in Arizona. To be exact, it is in Lake Havasu City, which is located on the west border of Arizona about two and a half hours south of Las Vegas, Nevada. If you hitchhike with one of our Embry-Riddle pilots, it’s only 106 miles due west of Prescott.

Lake Havasu City is a beautiful oasis in the middle of the Arizona desert. With a population of about 57,500 people, it’s big enough to find some excitement, but small enough that you won’t be bothered with traffic or too many people. The city is famous for its original London Bridge with an English village and waterfront activities.

The London Bridge was built in 1831 in London, England crossing the Thames River. At the time the bridge was built, there was not that much traffic on it, and if there was traffic, it was just several horse-drawn carriages. In the mid-twentieth century, cars grew more popular, and they presented a very heavy load for the old bridge. After over 130 years, the city of London decided to sell the old bridge and build a new one. When entrepreneur Robert P. McCulloch heard about the sale, he decided to purchase the bridge and bring the piece of history to Arizona, where he wanted to turn it into a tourist attraction.

McCulloch purchased the bridge in 1968 for almost $2.5 million. The bridge was dismantled to small blocks – which were numbered so that the construction workers could put it together exactly as it was originally – and brought to the US by cargo ship. After three years, the bridge was completed, and the city started to prosper as visitors and homebuilders were drawn to the area by the bridge. We enjoyed our stroll across the bridge and shopping in the English Village.

Lake Havasu City is also known for its water activities, which you can enjoy almost year-around. Don’t worry if you don’t have your own gear because there are plenty of rental shops there. You can choose from paddlesports, jet skis, scuba diving, wakeboarding, wakesurfing, and waterskiing. Or you can just hop into the lake for a refreshing swim. You can even find some shells!

Besides a lot of swimming, we also did a lot of walking. We found a two-mile walking loop with a lot of side walking trails leading off of it, almost all shaded by beautiful tall green trees, in the Rotary Community Park, which is located near the lake. The park also has covered picnic areas with tables and BBQs. There are six beach volleyball courts, two Bocce ball courts, and a big skate park.

We were the most impressed with the exercise stations along the walking loop. About every 500 yards, there was a station with about four-five pieces of exercise equipment. Each station was devoted to a different activity. At one station, you could work on your arm strength. At another, you could work out your legs. Another one tested your balance, and so on and so forth. There is also a buoyed swim area, boat access, and a non-motorized launch area adjacent to the park. The Rotary Park is frequently visited by both visitors and locals as its lovely greenery and calming atmosphere makes it the perfect place to exercise, relax, and rejuvenate.

In Lake Havasu City, visitors can also see more lighthouses than in any other city in the entire US. There are 28 different scaled-down replicas of famous US lighthouses from the West Coast, East Coast, and the Great Lakes. You can choose to drive to random lighthouses, or you can rent a boat and see them from the lake.

Lake Havasu City is not only interesting for its activities; you can also satisfy your taste buds by trying different types of cuisine. In the next Horizons issue, I will recommend some good restaurants and also mention some places to visit near Lake Havasu City.

Horizons is the Place to Be!